Warning: call_user_func_array() expects parameter 1 to be a valid callback, array must have exactly two members in /home/customer/www/rabbinachmanseltzer.com/public_html/wp-includes/class-wp-hook.php on line 287

Please Join My Newsletter for Divrei Torah and More! 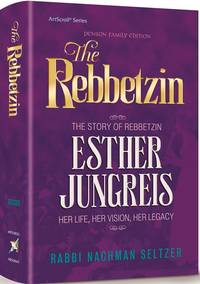 She was “The Rebbetzin” — Rebbetzin Esther Jungreis – and this is her unforgettable and inspiring story.

Born in Szeged, Hungary, Esther Jungreis descended from a great rabbinic dynasty that traced its lineage back to the days of King David. Having survived the Holocaust, she and her husband, Rabbi Meshulem Jungreis, were determined to devote their lives to combatting the spiritual holocaust of assimilation. Her life was infused with a giant spirit, and a fierce love for every Jew. She brought to Jews the world over a rare and wonderful combination: the warmth and caring of a Jewish mother (she made literally hundreds of shidduchim!), combined with the excitement and inspiration that only a truly gifted and dynamic teacher can share.

The Rebbetzin was written by Rabbi Nachman Seltzer, one of the Jewish world’s premiere authors, who interviewed close to one hundred people – family, shul members, students, neighbors, and many others whose souls she touched, who shared her devotion to Klal Yisrael. In these stories he vividly captures the life of one of the twentieth century’s most fascinating, charismatic and spiritually inspiring Jewish personalities.

The Rebbetzin is an absorbing and fascinating book to read. But more: it guides us to look to the future with a renewed sense of commitment, and to build upon the Rebbetzin’s accomplishments and perpetuate her inspiring legacy.

A parking ticket and an argument with a cop kept him safe him from a dangerous network of lies..

He’d achieved his dream – he was accepted to Chachmei Lublin, the yeshivah of Rav Meir Shapira zt”l. Then the Nazis came..

What was the secret of the Belzer Rebbe’s hoshana?

In this collection of true stories, we’ll read about a special child, a shofar – and a miracle. We’ll be introduced to a peddler who caused a highly-placed British politician to love the Jewish people. We’ll meet Holocaust survivors and kids-at-risk and Torah sages and “just-plain-people” facing extraordinary challenges.

As you read these dramatic true stories, prepare to be inspired. Illuminated. Awestruck. Moved. Surprised. Amused.

And, of course Amazed!

There are many tzadikim living in Eretz Yisroel in general and the city of Yerushalayim in particular. Many of them have become famous for their brachos, tzidkus and exalted manner of life. Yet others have managed to slip beneath the radar, while successfully avoiding the limelight and endless crowds. It is difficult to imagine that in a day and age where the media is so very pervasive and invasive, that there could possibly be people of such precious greatness still remaining relatively unknown to the outside world. Yet this is the reality. Yes there are many tzadikim who are known to all and visited by hundreds and thousands of people on a weekly basis. There are other men of stature however, who are equally impressive and distinguished, but have opted to remain anonymous and immersed in their world of Torah and Yiras Shomayim.

Tzadikim like Rav Yitzchok Nosson Kupershtock and Rav Zundel Kroizer, while familiar to the citizens of Meah Shearim as human angels, were content to live their entire lives in the alleyways and web of tiny streets off the housing enclaves of Batei Ungarin and Batei Broide. And there were many more people such as they. Together, these men of greatness comprised a group of tzadikim which operated as an unofficial sacred society. Having attended the same yeshivos and studied at the tables of the same scholars, they were childhood friends and in many cases even related to one another through marriage.

Inside Their Homes tells the incredible story of these men and their friends. It tells us about Rav Chaim Kanievsky and his Rebbetzin and about Rav Sruya Diblitzky. It tells the story of Rav Yitzchok Nosson Kupershtock and Rav Zundel Kroizer. And it draws us closer to the glowing fire of tzadikim like Rav Rafael Levine and Rav Yitzchok Zilber.

The common denominator throughout this book – is an old friend of mine named Reb Binyomin. He is a man who possesses a rare ability. I am referring here to his uncanny knack of being able to meet a tzadik and develop a relationship with that individual. The stories and anecdotes written here, are culled from his relationships with these men of distinction. Reb Binyomin has written seforim in conjunction with Rav Chaim Kanievsky and was asked by the Kupershtock family to eulogize Rav Yitzchok Nosson Kupershtock at his levaya. He is on a first name basis with much of the royalty of the Torah world. When he meets a tzadik, he doesn’t look at him merely from the angle of “what can I get from this person.”

On the contrary, Reb Binyomin asks himself “what can I do for the tzadik I have just met?”

Sometimes (but not always) he manages to find something to do for them. At other times, their relationship develops through different means. But somehow, this young man is a person who consistently connects to the gedolim that he knows. There is a unique element within him that binds his neshoma to that of the tzadikim he so respects. In essence, this character trait and ability is the secret of his success and close kesher to so many of the sacred society – both members hidden and known. He is beloved to them and vice versa and with many of the society’s members having passed away, or having grown very old, he feels that it has become time to share the stories, special traits and hanhagos of a generation of tzadikim who are nothing short of legendary – stories which he personally witnessed.

It has been an honor to work together with my dear friend Reb Binyomin on this project and may the Ribono Shel Oilam continue to guide his footsteps in the right direction, as he continues leading his fellow members of Klal Yisroel into the most precious doorways of the nation.

This is a true story so full of non-stop action, physical and spiritual courage, Divine Providence, spine-tingling adventure — and an utter dedication to Torah — that it can only be called: Incredible!

As CEO of Arachim, the ultra-successful global kiruv organization, Rabbi Yossi Wallis has touched and transformed the lives of tens of thousands of Jews, and has developed personal, warm relationships with many of our greatest Torah leaders.

Before he became a renowned kiruv master, Yossi (“Joe”) Wallis lived a life of breathtaking exploits and hair-raising escapes. It began on the tough New York streets, where Joe led the Bronx’s first all-Jewish gang, black leather jackets and all. It was a life that included dangerous encounters with the Mafia underworld, a stint in the Israeli air force, and an unexpected discovery of his Torah heritage while waiting in a restaurant for his treife sandwich.

Rabbi Wallis wasn’t the only illustrious member of his family. Together we will meet Rabbi Wallis’s ancestor, Rafael Vallis, one of the three last Jews to be publicly burned in a Spanish auto-da-fe. And Yeedle Wallis, Rabbi Wallis’s father, whose against-all-odds survival in the Holocaust and journey to pre-State Palestine is something you’d expect only to find in fiction.

This is a story that reads like a thriller, and, at the same time, it is an inspiring account of a spiritual journey.

This is a story that is simply Incredible!

In the short time since Incredible! was published, it had already become one of the most popular Jewish books of the last ten years! Read it yourself and find out why!